Preexisting Conditions: The Size of the Pool

John Cochrane of the Hoover Institute, formerly of the University of Chicago, calls preexisting conditions the “CENTRAL DEFECT OF AMERICAN HEALTH INSURANCE”.

People with chronic conditions, such as cancer, heart disease, diabetes mellitus and many other diseases, can be expected to have much higher medical costs than average people of the same age. Guaranteeing insurability for these people with money from the same risk pool fund prohibits accurate, actuarial risk assessment for the entire group and results in unacceptably high insurance premiums for everyone in the pool. Between 1994 and 2002, the state of New Jersey demonstrated this very well, as illustrated by this graph. 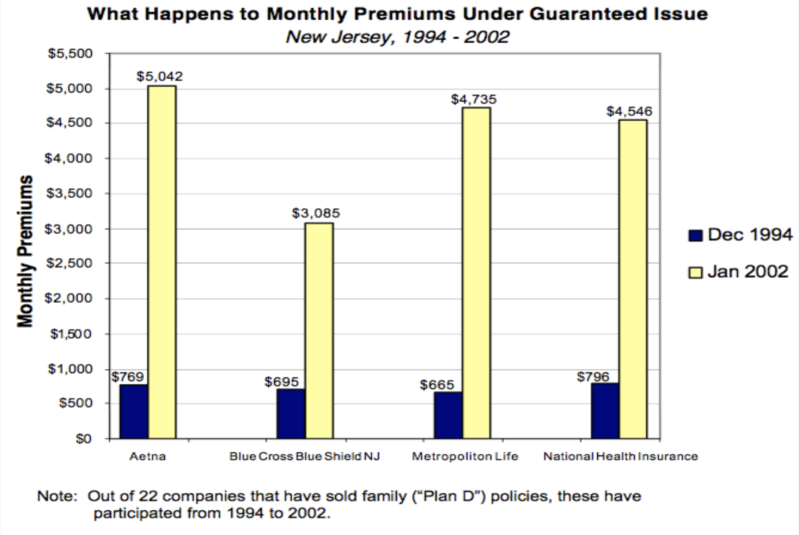 When the architects of ObamaCare consulted the insurance industry with this problem, they concluded that the solution was to enlarge the risk pool in the ObamaCare Exchanges by mandating the purchase of health insurance by all employers and individuals. People resented the mandates. Healthy people enrolled. People with preexisting conditions couldn’t pay the premiums and often went uninsured, thereby demonstrating what the state of New Jersey had already learned.

Once again, innovators had some great ideas.

Although ObamaCare Section 1332 waivers have not produced much in the way of successful health care reform generally, the Heritage Foundation’s Badger and Haislmaier point out that some progress is beginning to appear in relieving, or mitigating, the high cost of coverage of preexisting conditions.

The Alaska plan identifies 33 illnesses, any one of which qualify a patient to be placed in the high-risk pool. Funding for payment of medical treatment comes from four sources: 1) A portion of current federal subsidy payments is diverted into the state pool, instead of reimbursing insurance companies. 2) Non-federal sources include a portion of premiums previously paid to insurance companies prior to treatment costs being transferred to the pool. These funds are transferred (ceded) to the pool. 3) State assessments on insurers and (4) state general funds are also added.

Enlarging the pool in this way led to significant premium reductions (range = 7 – 30%) and enrollment increases (range = 1.8 – 18.8%). Generally, premium reductions and enrollment increases varied with the size of the mitigation, but they were not necessarily proportional. Public resources were targeted to people with the costliest medical claims.

According to John Goodman of the Goodman Institute in Dallas, Texas, Medicare Advantage succeeds because the Medicare subsidies are based on the health of the patients, not their age, and are much higher than ObamaCare subsidies, which fail, largely because they base government subsidies on age, not the health of the patient. Alaska, Minnesota, Oregon, Maryland, Maine, New Jersey, and Wisconsin succeed because the authors diversified the funding sources, thereby increasing the size of the pool to include preexisting conditions. The same principle applies to both.

IT’S THE SUBSIDIES, STUPID! I received this enlightenment in a blog from the Goodman Institute that came to my computer as I was writing this column. It clarified the differences between the three programs. This explains why ObamaCare premiums rise and enrollment drops, while Medicare Advantage and Alaska plan premiums are stable, and enrollment increases.

With preexisting conditions, one important key to affordable coverage is to expand the funding pool.